Resurrection of the Devil 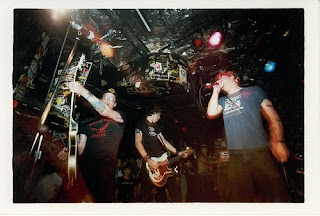 Murder City Devils are a Seattle band that did nothing by halves. Punch-ups, flammable liquids, spit, sweat, a bit of music - MCD gave it their all. And when they imploded back in 2001, spreading out to the likes of Modest Mouse and Pretty Girls Make Graves, especially with the success these bands had, it appeared that the whiskey-drenched dream was over.

But the devil never dies, and the guys have been playing around the traps for some time, on and off. Now I can give news that not only are the boys back together for a bit more than just a couple of gigs, lining up three national tours, but there's rumours of new material to boot! This is fucking amazing news - Murder City Devils are one of the best bands EVER. They are unheralded in their bruising organ-led rock n roll, and they are about to take you all down to their own level of hell.