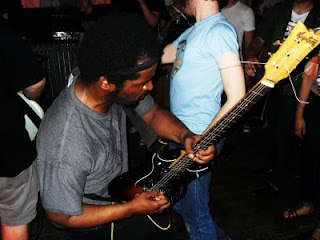 Sometimes, I can be ridiculously stupid.

In my line of work, it is imperative to be wary of what information you search for on that treacherous Mad Max-esque superhighway known as the Internet. In fact, about three-quarters of the nEt’s sites are blocked at work – including anything run by Google, Blogger, Wordpress… Which usually means I glean musical knowledge from either the conglomerate (AKA eeeeeeeeeeeeeeeevillllllllllllllllllll…a) music sources, or from small and inadequate ones, until I get home and ransack my laptop for hours. But over the course of months I have stumbled across many a good site that allows me access to favourite and new favourite bands.

Still, when searching for a band like ’s proudest sons of psychedelic smut Puffy Areolas, more than one eyebrow is likely to be raised.

A cursory perusal of the sexual predilection for the relaxed state of the nipple on the Wiki for Sex site aside, I have managed to stay abreast (lazy, I know, but I will always find such jokes to be knee slappers) of Siltbreeze’s advocates for sludgy pysch that proves to be as sweatily fun as it sounds. Kinda like Comets On Fire on speed if they were the house band for one of Benny Hill’s sexy parties.

And I am pushing hard to advocate their latest output, In The Army 1981. It’s a great title for two reasons – one, because I was born in ’81, and two, its almost the title of that seminal masterpiece featuring Pauly Shore about two slacker water suppliers that end up in the Gulf War – yeah you know the one, with Lori Petty, and all the Oscars and acclaim.

And I also believe, on a more serious level, that it is one of the best releases thus far this year. When at the pub the other week with Paul, I tried to push this on him, but he had yet to taste the salty goodness. I think I have a convert though – and I wont rest until you join the cult either.

In The Army 1981 offers that famous shitgaze styling championed by Siltbreeze, but with a frenetic sense of fun that you can't help but dance maniacally whilst smashing as much shit up as possible. Its actually packed so full of awesome angsty energy that every listen is...well, not enough. It also has 'Get Me Out Of Houston,' an epic space drone that ties the album together.

This album fucking rocks, all the time. And anything that refers to breasts and yet destroys so readily and wantonly - definitely becomes my favourite of anything, anywhere, anytime... Expect this to be in the running for the top ten of the year...