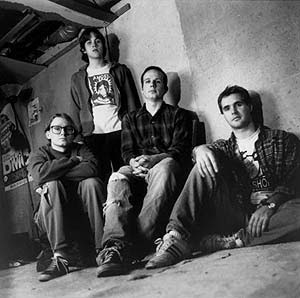 Sonic Masala is not about the next big thing. Its not about what’s hot. Its about music, what I enjoy, and hopefully you get involved and enjoy too. Overall, as is stated in our ‘mission statement’, its all about a few people playing and writing about music that they love - past, present and future.

But where does this music come from? A basic question, one that is too basic for its intended purpose. Im not talking about what instruments, or which players from which band, or what country of origin, or what scene. Im talking about where did it come from in order for it to fall into my ears and stay there, only for me to impart it upon some other poor soul?

Ah, there’s the crux. If Im imparting it onto you, who imparted it onto me?

I like to think that I ‘discover’ a lot of music on my own. Bands such as Mogwai, Explosions In The Sky, the Raveonettes, Warlocks, Snowman and Liars (I could go on…) were serendipitous – where I have fallen for the cover art, or have liked the name, or found them on the internet and have bought an album based on a 30 second sound bite on Amazon – a leap of faith, if you will. Many others are from various sources – your local record guy (Hot Snakes, Slint), a clip in a film (Elliott Smith, Kronos Quartet, Dirty Three), your favourite radio station DJ (Tortoise, Fugazi, …And You Will Know Us By The Trail Of Dead). But above all it comes down to your family, your friends, your nearest and dearest – and with me it is this love of music that sees us through in the first place.

This is a longwinded explanation to justify listening to this band. I have honestly only listened to HUM the past few days. Which is fucking weird, as HUM have also just done a one-off reunion show in the . Anyway, it was floating on my iTunes due to a friend of mine back in , Andy. We bonded at my sister’s going away party back in 2006 (?) over post-rock bands, all down to the fact that he was wearing a Godspeed hoodie and was blown away that I recognised it. Since then we have had our agreements (The Middle East, My Disco) and disagreements (almost all gangsta rap, although Im being swayed by Body Count – more on that in another post), overall its been a happy musical relationship.

SO…HUM, a dark, heavy, melodic, yet nerdy band from Illinois that were quite big in the 90s but I somehow missed them (except for their bizarre appearance on Adult Swim’s Space Ghost: Coast to Coast – where I also saw Pavement (announced as The Beatles) for the first time – weird…). They did a lot of their early stuff with Steve Albini, went large scale with 1995’s You’d Prefer An Astronaut before imploding in 2000. They have a soaring heaviness to them, with a penchant for space that is reminiscent of bands like Oceansize (ok, damn it, I don’t care – I actually like some of Oceansize’s gear, OK?) Someone said there is early Incubus in their sound, which is kind of true, and yet kind of very rude and upsetting. Anyway, I like it, its pertinent enough to bring it out of the alcove of the musical closet to give it a dust down, and it’s a pint-shot raise of the glass and a salŭt to Andy, his lovely wife Amy and the coolest dude to wear mini-Vans, Carter. Miss you dudes so...

Email ThisBlogThis!Share to TwitterShare to FacebookShare to Pinterest
Labels: HUM