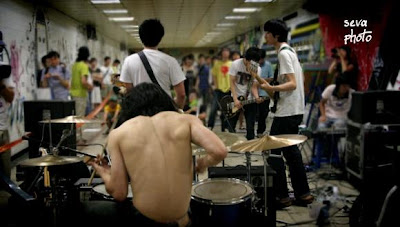 Frenzy - not the most imaginative name in the world, but still - they are a band from South Korea that are thrashing out instrumental noise and are railing against their captive northern brethren through sonic weaponry (presumably...) They have just released an album, Nein Songs, that has moments of true genius. Again, when you take a frontal guitar assault on post rock, there are limited avenues that one can take and make their own. Therefore Frenzy run the risk of being cast off as being too Mono or too Explosions in their delivery (I havent placed Mogwai in here as I feel that no one has amply offered a sonic equivalent - nay, even an imitation - of their sound palette - but I am incredibly biased), and unless you have something new to bring to the table, beware...

However, I am a massive advocate for instrumental music in general, and rock in particular, and much can still be gleaned from Frenzy. 'Lily' is a slowburner with elegant moments, '안녕' is understated in its modest math rock rhythms, and songs like 'Sundance' and '소멸하는 밤 Part.2' offer some searing walls of sound and distortion that washes over you in such a way that rather than be deafened, it clears your mind to take in the quieter, more uplifting elements of the tracks.

Nein Songs is out now through TuneTable.

Email ThisBlogThis!Share to TwitterShare to FacebookShare to Pinterest
Labels: Explosions In The Sky, Frenzy, Korea, Mono