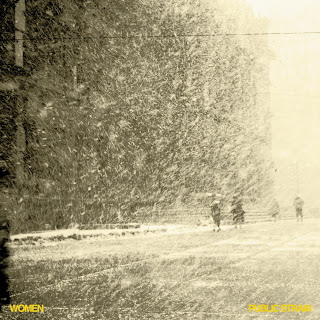 Last night Brendan and I met down the pub to talk music, again. Nothing strange there. But Brendan did let loose the news that Canadian band Women have a new album, Public Strain, coming out in August on Flemish Eye. This might not seem like the biggest news to most people but to my basic ears this is the kind of news that rocks my perfectiionist, music obsessed, world. You see, Women's self titled debut was one on of my top five albums of last year and criminally most people haven't even heard it. Even more criminally Pitchfork picked the track Black Rice as one of their top songs of all time. Idiots! The album is packed with better, more noise drenched, distorted takes on Beach Boy pop 'gone wrong' than any man could wish for, examples below...

But back to point of the post. Women's new album, Public Strain, due in August. Unfortunately there aren't many mp3's doing the rounds, other than the live acoustic version of Venice Lockjaw (formerly Salt Remains) below. So lets just hope the band haven't listened much to Pitchfork and have listened to lots too much noise.