A Maelstrom On The Surface Of A River 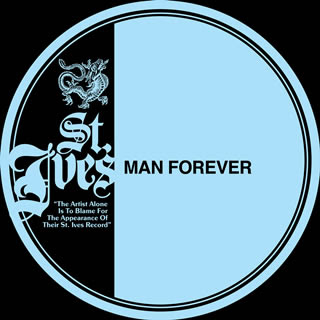 AH, Oneida. Paul has raved ad nauseum about these guys ever since I met him at Offset in September 2008. Admittedly I had never heard of them until I got home, all sweaty and sunburnt, to look them up. He was, of course, correct - Oneida are an experimental tour de force, who for some unbeknowst reason has garnered a reference here yet - AT ALL. Well, although this isn't an Oneida piece, it is the first of 2 - count em - 2 posts on Oneida side-projects. Both made responsible by the one, the only, Kid Millions.
First is his about-to-be-released-through-St. Ives vinyl drum explosion, monikered Man Forever. It is an experiment in drumming - with seemingly infinite drums rolling and thumping each other over the period of an hour, reaching a tone of 180 bpm. Im finding it hard to explain - but I love it. This is the album for the people that appreciate the art of the beat - but are also open to more than a gallon drum of crazy. There isd still that overall obsession with repetition that is a hallmark of Oneida, but this is without a doubt a pulverising Kid Millions masterstroke. Not likely to be overly popular, but amazing nonetheless.
A drummer's orgiastic paradise...