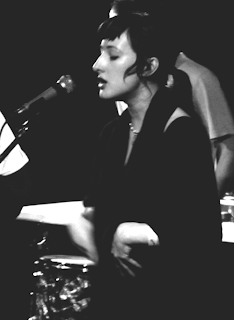 Oh, the banshee/siren/beauty/devil that is Zola Jesus, how you have bewitched me with your spectral Gothic (note the big G?) breathings, screeching aural attacks and your brooding, seductive forms. You have me in thrall...

And now for three bits of topsy-turvy news. The first is that Souterain Transmissions has re-released her last EP Stridulum and added three new tracks, expounding the thematic content and thus creating an album length release, conveniently entitled Stridulum II, upon which you can find 'Sea Talk'. Its a European-only release. This song isn't necessarily 'new' - it can be found on her Tsar Bomba EP - but its been spit-shined and streamlined, and you can listen to the result below...

Secondly, Fucked Up are releasing the new section of their 12" series, Year Of The Ox, in September, which promises to feature a Zola Jesus appearance! Crazy but true. If you don't believe me, check out the streamed track here. (NB - this release deserves a post of its very own...BT)

And finally, the woman also known as Nika Rosa Danilova is plaguing London on September 1st at Camp Basement. Why does that date sound familiar, you ask? Because Women are playing the same night, that's why! Gah! Well, before you submerge yourself in the tepid bathtub water and wield that razor, she has been announced as the support act for Fever Rray - which for me has freed me up no end! What a Saturday morning, eh? Now to head off to 1234...