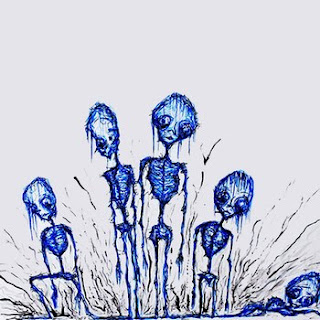 Listening to Bridal Party's 'Under Peyote' doesn't remind me of being under peyote. At all. It sure is trippy though. And it actually reminds me of a wedding reception I went to back in 2007... But that was marijuana - and beer - and red wine - and tequila - and a darkened golf course - and a taxi rank - and red vomit - and a swimming pool. So...yeah.

Its going to have that immediate Animal Collective tag pinned to its chest, but 'Under Peyote' has a droning quality all its own due to Mike Marias's insistent monotone vocals and that spaced-out opening guitar line. However, most of the songs on album Born Again On Dark Star are that bit left of centre, that bit in the shadows, that bit skewed and twisted, that they come across more like if Animal Collective were to look into a warped mirror, their features melding into each other until the image that could be made out was an amalgam of their limbs, eyes and hair, a crazy kaleidoscopic Rorshach print. Or the inverted reflection of Liars...

You can find this track on the Illinois outfit's album, which they are releasing for free on their bandcamp page. Exciting stuff.