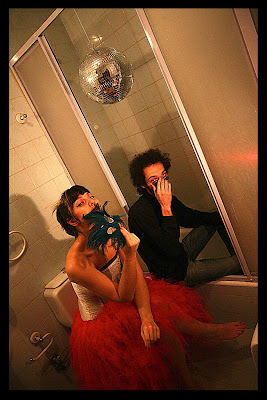 This is a monumental post for Sonic Masala - our first interview! I caught up with Şahin Kureta from Turkish electro moodists Fuji Kureta to discuss some of the more interesting facets of the band.

(NB - this is literally my first interview, so my skills are quite lacking. That said I feel that it went ok - Şahin was happy with it at least! BT)

SONIC MASALA - I have to say that after you got into contact with us, I tried to search for all and any info on you - and it was a difficult task! Is this a deliberate ploy, to keep a mystique surrounding the band? Or is it just an English language breakdown?

ŞAHIN KURETA - Nothing deliberate actually, it must be an English breakdown. On the contrary, we are very willing to have our name everywhere on the Internet; so that more and more people would listen to our songs. Actually in German, Slovakian, Croatian, French and of course Turkish language there are some info about us.

SM - What caught me off-guard about your music on first listen was the bilingual nature of the lyrics. What is the main purpose of mixing up the languages used in each song?

Kureta - Because we are trying to reach everyone around the world, so we need to write our songs in English, but Deniz lived in France for 9 years and she likes to write lyrics in French. So we have songs in both languages. Maybe one day we will even write a song in Turkish.

SM - You are constantly referred to you as a 'down-tempo' band. Would you refer to yourself in that way?

Kureta - Well maybe not, because in “down-tempo” there is “down”. But we try to write positive songs, full of hope and happiness. We are definitely not depressed people, we love life. And we write some up beat songs for the new EP.

Kureta - Yes, we are currently working on a new EP, we hope to release it this autumn.
SM - What is the Turkish music scene like? Are there any local influences or 'scenes' that are prevalent or dominant in Istanbul?

Kureta - Istanbul has an important rock scene. There are a lot of Turkish rock bands. But since 5-6 years now there are more and more electronic music bands like Fecr-i Ati, Portecho, Solardip… And we are also a part of this emerging electronic scene and very glad to be a part of it. Mostly the West influences our music though; you can’t say it is “Turkish” or “eastern”. And we are not the only ones like this in our country. We grew up listening to some Turkish music, but also American, English and French music.

SM - What does the future immediately hold in store for Fuji Kureta?

Kureta - We have the new EP coming out soon, and also on September we will play in Germany for the second time, at KuRT Festival in Reutlingen, then we would like to play some gigs in France. One EP release and a small Germany-France tour would be perfect for this autumn.

SM - Perfect indeed! If you could support any band in the world, living or dead, who would it be, and where would it be?

SM - Finally, what IS sonic masala?

Kureta - “Masal” means “tale” in Turkish. So sonic masala is a sonic tale.

Couldn't have said it better myself...