Slumbering With The Grown Up Sea Lions 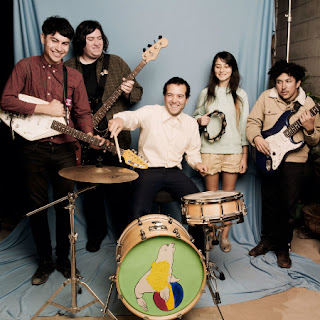 Slumberland Records aren't sitting idly as the Christmas month comes lumbering out of the darkness, instead they are intent on adding one more parcel to the bundle. This pressie comes in the form of the (almost) self-titled debut LP by the Californian band Sea Lions - seriously, look at the below piece o wax! It even has Christmas colours! 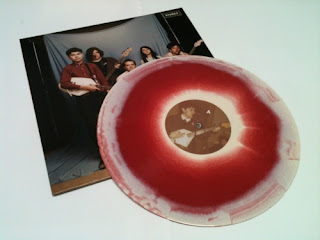 The album itself is fully of jangly cheek, playful disdain, angsty stiffness - a quivering ball of pop contradictions, basically. but what I really dig about Everything You Always Wanted to Know about Sea Lions But Were Afraid to Ask is their propensity to walk the tightrope and not fall into the abyss of tweeness or arrogant hipsterdom - even though there are teetering moments (the Woody Allen reference in the title is a glittering nugget of gold though in my opinion). It's harmless fare, yet its warm, and gets multiple plays with the addition of some real hook-laden fun

You can grab Everything You Always Wanted to Know about Sea Lions But Were Afraid to Ask here.

Sea Lions - Grown Up
Posted by Brendan T No comments: 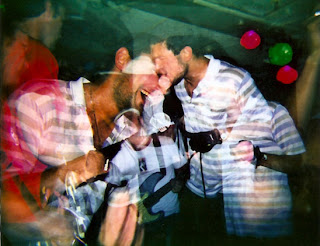 A great way to end out a quiet week here on Planet Masala, which then leads into an almighty month of craziness! Here is a cut of the brilliant Eddy Current Suppression Ring's bits-&-bobs release So Many Things, which is a better album than most other bands' actual albums. This one is a cover of terminally underrated Aussie act of yore The Chosen Few, 'T.A.L.O.I.G.A.' So good. Later kids! If you're in Brisbane this week, you must get to AT LEAST THREE OF THE FOLLOWING SHOWS - Mere Noise Meltdown (Saturday, featuring Guitar Wolf!!), OFF! (Sunday & Tuesday), Mudhoney (Monday), Unknown Mortal Orchestra (Monday), Future Of The Left (Tuesday), Kurt Vile (Thursday) and Fucked Up (Friday)! Jesus tittyfucking Christ, it's good to be here and not there (IE anywhere else) right now!!!

Email ThisBlogThis!Share to TwitterShare to FacebookShare to Pinterest
Labels: Eddy Current Suppression Ring, The Chosen Few, The Friday Cover Up

Kicking Back In With Some Black Tambourine(s) 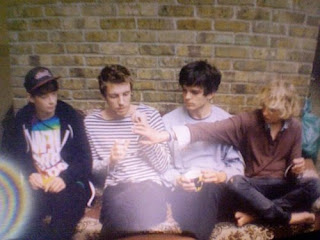 Wow, a quiet week (IE no posts AT ALL). I apologise. It isn't going to get much better over the next few weeks though, what with the avalanche of international bands bombarding Brisbane and the heady Christmas celebrations going on around here. I had such a handle on December last year too...sigh.

Well, I thought Id give you some good stuff anyway. Here is the EP from Cornish devils The Black Tambourines, Chica. Art Is Hard are putting out this hedonistic slice of dark-corner-of-the-garage fuzz, and it'd make a lovely little Christmas entree. In fact, I will have a multitude of cool Christmas gifts in the forthcoming posts that you could consider for those you truly love. Anyway, listen to Chica below, then take '27-25 Blues' home with you. Go on - you deserve it.

The Black Tambourines - 27-25 Blues
Posted by Brendan T No comments: 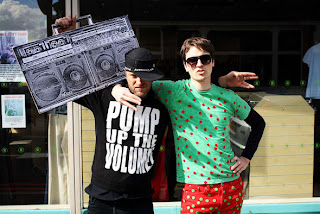 Guess what? For the next few days (until midnight Monday December 5) that dastardly duo otherwise known as Civil Civic are giving Sonic Masala punters (that's YOU!) the chance to get their debut LP Rules for 10% off the normal price! This is great news, as all of you should own a copy of this fun as hell record and play it till it breaks, thus buying a second one as backup. The catch? Not really - you only have to head over here and add "discountsrule" in the code section, and voila! This incredibly awesome piece of instrumental alchemy is all yours, for a fraction cheaper, meaning that you can still score tonight.* WIN WIN WIN.

* By score, I mean shooting holes. I mean hoops. Yeah, you knew what I meant...
Posted by Brendan T No comments: 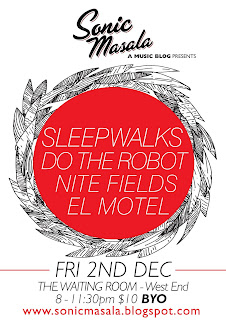 Tonight it all happens again for the second instalment. Headlining are the upper crust grungeheads Sleepwalks, whose debut LP The Milk Has Gone Sour (produced by Steve Albini no less!) came out at the crowning of the year. A smash and grab affair, it is a fun piece of work (despite the fact I gave it only three stars for Time Off at the beginning of the year, a fact I may never live down). This is likely to be a fantastically sloppy earblast, and the lineup is rounded out by much-loved husband/wife dream-pop manipulators Do The Robot, garrulous shoegaze explorers Nite Fields, and new kids on the block, rusty blues duo El Motel. All for a tenner (and BYO means it stays a cheap night!) It looks like it could rain again, but don't let that deter you for an awesome night of eclecticism and alcoholism! Should be madness, and it kicks off at 8pm - see you there!