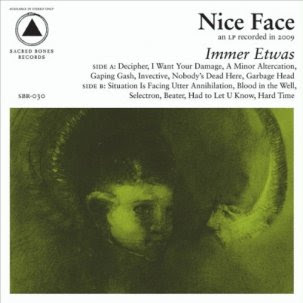 I know I mentioned this guy (its actually these guys now - its expanded to a 5 piece live act) Nice Face some time ago in anticipation of his debut LP Immer Etwas. Well, that date has come and gone, and not enough has been mentioned of its brilliance. Nice Face had to climb a major mountain to overcome the awesomeness of Can I Fuck It?, which they brought out last year - or was it 2008? It seems like Ive been listening to it forever! Anyway, Immer Etwas is great. This guy - Ian Magee if anyone's interested - is doing his own gear with what he can, but unlike most of the other pretenders of 2010 he has more punk nous in a pinkie hangnail than they do in their entire Weekend At Bernie's persona. To me he is the mirror image to Beach Fossils' Dustin Payseur - all blistering riffs and worldly angst juxtoposing BF's intricate guitarplay and slacker malaise. Nice Face (is it a Monks reference? Makes sense if it was...) are the real nihilists - what Crocodiles want, or at least wanted, to be. Put out by Sacred Bones, Immer Etwas is out now.
Nice Face - Nobody's Dead Here
Posted by Brendan T