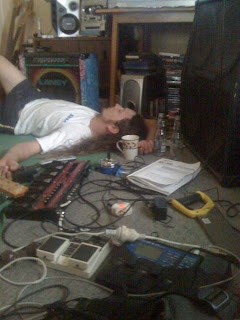 I thought Id squirt out a quick post about a band in Brisbane that's probably flown under your radar. In fact, LIBRARIANS have flown under everyone's radar. This is possibly due to the fact that they are so amazing they are physically, psychically and aurally invisible...or that they are yet to release anything, or even play a gig. Im gonna go with the former...?

LIBRARIANS is the afterbirth of Matty and Spandy, two dudes from opposite sides of the Atlantic that met in a rundown dairy, skimming flat stones off the surface of unprocessed, unpasteurised milk. It may have had a thick film over it, so technically the stones bounced rather than skimmed, but irregardless, an unholy matrimony was born. The guys make noise with synths, effects, guitars, and other stuff. Its pretty good. They, on the other hand, are not.

Let us at Sonic Masala know what you think...

Email ThisBlogThis!Share to TwitterShare to FacebookShare to Pinterest
Labels: Librarians