Dark Side Of The Sun 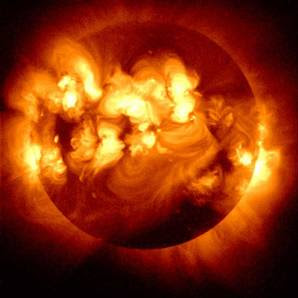 I had a brief chat with Will Weber yesterday which reap some rather glorious rewards...

Will Weber's alias is Sunspots. He is not a superhero (well, not that he's told me); instead he is a bedroom weaver of psychedelic dreams. He comes from a really great scene growing in Athens, Georgia. Not that Athens hasn't always had a nice scene... Recording since High School, somewhere along the line he got into psychedelic music. Each song is shaped by the resources at hand as much as any active attempts on his part to make them adhere to some specific idea and as a result there is a very nice connection between the songs in a live setting and the songs recorded. The live/recorded versions of the songs are each extensions of one another. The emphasis on the recordings leans into aesthetic territory while the live songs tend to lean towards high energy. To help bridge the gap between the two sometimes a loop pedal or a computer is utilised. He is currently working on recruiting some really talented musicians to turn Sunspots into a more collaborative effort in the future.

At a show you should expect two drummers, trumpets, synths, guitars, and perhaps a mask or two.

As for future releases, expect a 5 song Sunspots Ep by September. An album is in the works also...

Oh and the state is trying to prosecute Weber for possession of mushrooms. What a country eh?

Email ThisBlogThis!Share to TwitterShare to FacebookShare to Pinterest
Labels: Sunspots