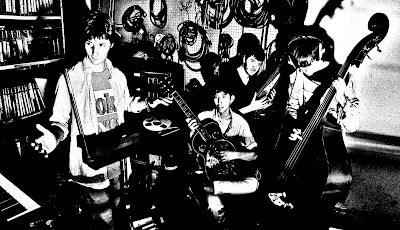 I'm only posting this track 'cos other blogs have already. There you go, layed it on the line. I'm sure by now that your aware that Deerhunter have a new album coming out in September entitled Halycon Digest, out on 4AD, and you may be aware of the 'send in a photo of you with the Deerhunter post-punk style fly' style launch tactics, website here. I for one thought it was a nice touch on the part of Mr Bradford Cox, design aesthetics and music go hand in hand in my world. Any way if you took part and did send in snap of your self with the flyer then, like me, you've been receiving emails with info about the new album, Halycon Digest, over the past couple of weeks, like the track list below...

But lets face it, we that made sent in snaps just wanted a track to reward our efforts. So here it is and it doesn't matter that I'm going behind the bands back 'cos you've already made the effort your self and sent in your own photo, haven't you? And hence why you already have the digital 7" Revival and have no need to download it from the link below. Promise?

p.s of course the b-side Primitive 3D is a real gem too and well worth the effort of tacking one photo, and no I wont post it.
Posted by Paul M