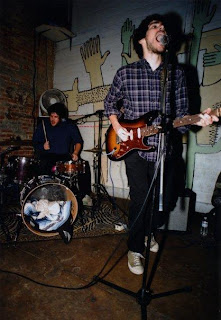 Got an email last week from Andrew of Papermade Records about these guys. Rare Grooves is the collective works of Danny, Tabor and Chris. They used to be called The Widow Babies. They pump out syncopated beats, twanging guitar lines, slacker ranted vocals, and a strong sense of how to create a slow-burn rock sound. They are releasing a 7" called Cause For Concern. The bass lines have been pumped out by none other than perennial musical workhorse Mike Watt. The two songs that fill out the 7" run into each other beautifully, so much so that I have been playing them back to back, over and over, since putting it on - half an hour ago. Buy it now for $5. Its very rad. Fin.