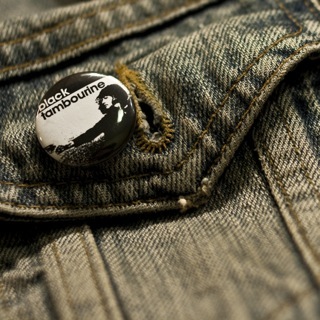 Brendan posted about Whirl recently, a softer sided shoegaze slice, and with all the rough around the edges garage pop kicking about I couldnt help but be reminded of Black Tambourine, the influential indie-pop band form the early 90s. It probably also helped jog my memory that Slumberland Records put out a new compilation, self titled Black Tambourine, back in March. Considering the band only ever put a small handful of releases in their day, its an extensive overview of the short but influential life span of the band and even includes new additions to 1999's Complete Recordings. So next time you're listening to a new band high on a feedback-enshrouded collision of blissed out noise and pop, aka Vivian Girls, The Pains of Being Pure At Heart, Wavves or Dum Dum Girls, just remember that these bands owe at least a nod or two to Black Tambourine... oh, and probably The Vaselines too, but who's counting!

Check the priceless Super-8 footage below, shot by Daniel Searing Jr back in the day, at the band's WMUC radio session, 1990, and just to prove a point the Dum Dum Girls cover of Throw Aggi Off The Bridge.


Black Tambourine "For Ex-Lovers Only" from Slumberland Records on Vimeo.