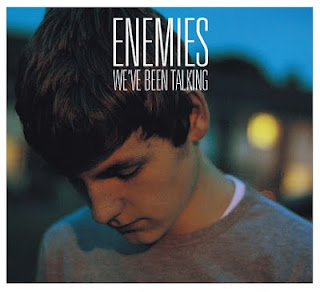 Enemies. We all have em, whether we like it or not. Mine has to be the 60 year old lady two blocks away who always hits my shins with her stroller, takes the red pepper I had my eye on, and smells like formaldehyde.

And now there's more to add to the mix. The Irish math/post rock act Enemies have just released We've Been Talking, and whilst it doesn't hold any of that raw power and brute energy that compatriots And So I Watch You From Afar have when they step up to the plate (although there may be some rubbing of shoulders if you listen to the late breakdown of 'Nag Champa'), there are some nice curveballs, such as the slight moment of respite in the middle of 'Fierce Pit Bosses' or the growing intensity of 'Gingerly'. It has a wiry enthusiasm all its own, and would be electrifying live.

Enemies aren't making to tour the UK just yet, focusing instead on their homeland and Japan (huh?), but expect these guys to be giving you wedgies, wet willies and stealing your lunch money in the very near future - if not tripping you over in your attempt to get to the self-serve aisle at Tesco's... I really don't like that old lady...hag...

Email ThisBlogThis!Share to TwitterShare to FacebookShare to Pinterest
Labels: And So I Watch You From Afar, Enemies