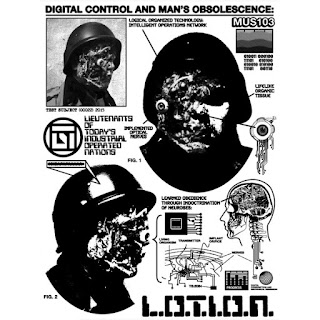 My brother-in-law sent me a message the other day, saying that after a long stretch in electronic maelstroms he had found a couple guitar albums that gripped him. Digital Control And Man's Obsolescence is one of these albums. The band - New York hardcore noiseniks L.O.T.I.O.N. It kicks off with the winding up of helicopter engines, cataclysmic drumming sounding like automatic fire, feedback heralding in Hell on earth. The sharp short songs inflict wounds both real and imagined, a firebrand brutalism that revels in industrial destruction and repetitive mayhem - with tracks titled 'Ultimate Wound Kit', 'Torture Report' and 'Fukushima Fallout', the desolation is feral and complete. It plays on real life global fears, and perceived futuristic fallouts on the horizon, as mesmerised by human evil as cyberpunk dystopias. There is no hope, no salve, no miracle cure - and L.O.T.I.O.N. exist to aggravate the wounds.