The Destruction Is In The Periphery 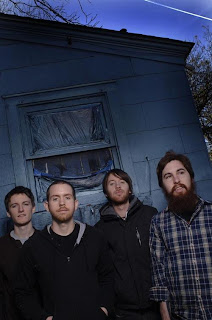 Texan post rock legends This Will Destroy You have been busy of late. They released 1o" Moving On The Edges Of Things, in accordance with Record Store Day, have also dropped a three-track single, Communal Blood, and have given the word that snd LP Tunnel Blanket has finally finished being recorded. They will grace our presence at Underworld on 30th September (almost exactly a year on from their stellar gig at the same venue), but before hand they are playing all over the US supporting two bands of vastly differing influence, Autolux (nice!) and Deftones (random as fuck...but so so sweet!!), before laying waste to the vast majority of Europe in early Autumn. I have to say that the 10" was much darker, brooding, and curling-around-the-esophegus-evil than anything they have previously put out by a long shot, whilst 'Communal Blood' seems a real amlagam of the the 10" and 2008's self titled monster LP - sounding almost Mono in its scope... The September release of Tunnel Blanket, and that Underworld, gig, are racing up the totem pole of hotly anticipated events of the year, guaranteed.