Only Fools and Dead Horses 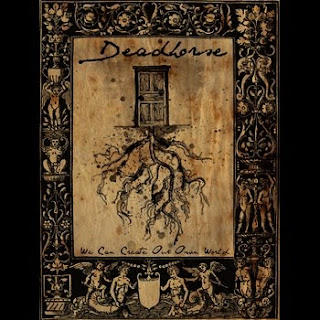 The weekend just past I spent writing, both the posts that have glutted up the blog this week and my own stuff. I should have been enjoying the beautiful weather...but that's another story...

Anyway, one SM reader alerted me to their favourite Yume Bitsu album, which I promptly hunted down, and in my excitement I bought another album of a band I hadnt even heard, let alone knew, due to the fact of that little consumerist add-on "if you like this, you might like..." Making such a hasty decision means Id been cooped up too long and needed to leave the house. But I had to at least listen to the albums before venturing out into the blinding light. Yume Bitsu's self-titled 1999 LP was magnificent - I had decided it would soundtrack my day. Then I listened to the second album...

Deadhorse is the band's name. We Can Create Our Own World is the name of the new debut album. And whilst I felt it was unfairly hamstrung by the fact I listened to Yume Bitsu first (its a truly great post-rock album; wish I had picked up on them earlier!), their effort cannot be ignored. My only touchstone would be either a gloomier, more Gothic (not to be confused with goth...) Explosions In The Sky, or a more elegaic Mono...

All in all, my Sunday was great. I went to the park, finished reading John Banville's Ghosts, started David Simon's The Corner, had a couple of Coronas, and realised no matter how shit life can get, you will always have your music. And now Deadhorse is a part of that ephemeral, existential whole. Nice.

Deadhorse - Dreaming In The Face Of Disaster