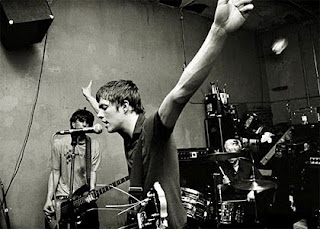 I actually don't know how I came to know about Unwound. There is no definitive timing; no event, person, place that comes to mind. I cant even place them in that 'strike of lightning' moment of giving a band a chance based on a piece of artwork, or a photograph, or a snippet of article or sound bite. I just heard their final album, Leaves Turn Inside You, at some stage, somewhere, under muffled tones earlier this year, and now it is my current soundtrack.

Unwound were a noise band from Washington, existing for about a decade before dissolving in 2002. A mainstay of Kill Rock Stars, Unwound continued to redefine their sound throughout each release, something I have only come to realise in the past week as I hunt down their previous musical departures. Of course, having heard Leaves Turn Inside You makes that the watershed album for me, and the benchmark for all following albums, but its true to say that Unwound are an unheralded act, their angular attack on guitar rock at once a notion of its time and place within a 'scene', emblematic of an aggressive collective outlook on music that mirrored that of their forebears and able-minded peers (anywhere from Sonic Youth to Fugazi/Minor Threat to Shellac to Drive Like Jehu to Gang Of Four - traversing a number of genres whilst sticking steadfastly to 'louder is more'), and unique to the point of being criminally undervalued and ignored. Furthermore, it makes me wonder if these types of bands will ever exist again - truly agressive, angular guitar rock... And yet their legacy does live on through devoted kudos given by the likes of ...And You Will Know Us By The Trail Of Dead and Cave In. This 3-piece should be listened to, ad nauseum, post haste. Thus it is my pick of the day, week, and month.

Here are a list of reviews for Leaves Turn Inside You, and a few tracks to cut your teeth on. Sincerely, get this album. It is fucking amazing. A true album's album - not as post-hardcore as previous offerings, but a fully immersive effort, I can't say enough about this album

Unwound - Off This Century
Unwound - Scarlette

And, just to diversify, here's a track from their 1996 album, Repetition. Every album is different, every album rules. I can't say enough about this band.

Unwound - For Your Entertainment
Posted by Brendan T