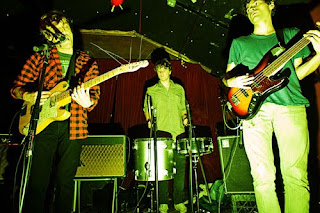 Woven Bones released a very impressive debut LP this year after threatening to destroy via a series of smaller releases over the past 12 months. In And Out And Back Again had everything you expect from them (and HoZaC Records to be honest) - their iridescent hazy pop grime smashes through your defences, seducing you, defiling you, then leaving you in quick succession with nothing but a ringing in your ears left behind.

Well, the folks over at Insound Studios let us in on their recent session they did with the Texans when they roared into NYC recently on their continued long distance trawl through the US, playing with the likes of Happy Birthday, Woodsman, Crocodiles and a little band called Pavement...

And just to add to the saliva already forging forth over the crest of your lips, here's a new Woven Bones track!