Secret Abuse of your soul 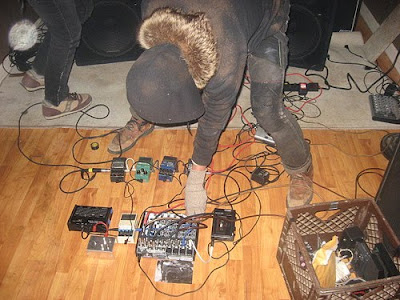 All the noise stuff that's popped up SM recently got me thinking about the single man noise scape builder Jeff Witscher, better know as Secret Abuse. I guess Secret Abuse would fall under the Drone-noise remit but for me Secret Abuse has always been about building atmospheres and soundscapes, and then drowning them all under a sea of haunting noise. The man makes epic stuff. The 2008 L.P Violent Narcissus, on Not Not Fun, was some of Witscher's best work in my opinion, it had a more vicious edge to it, and although last year's The Immeasurable Gift explored new frontiers I still always find my self drawn back to one track Fly Away to Greater Pig Shit. It's vast sound scape of a song that builds to its own final destruction, like watching the on rush of nuclear fall out whilst standing in a perfect field flowers, kissed by a summer breeze. Total claim before the final storm. Personally I find cleansing, but then I would.