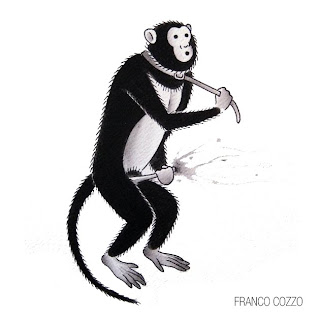 An act that are thrashing their way around the dirty backwater dives of Melbourne is Franco Cozzo. These terrorists pulled their moniker from an Italian/Australian businessman, self made, self funded - including the advertisements... These guys have nothing in common, other than being self made and for being loud. They certainly aren't making squillions, but what they are making is a bloodied porridge of noise pastiches that homage many bands of yore and of now - there is as much early Sonic Youth as there is current My Disco in their short bursts of violent static electricity. Its always threatening to fall apart, to implode, and yet somehow stays afloat on the raging black seas, holding your head under water just long enough to see black spots before allowing you to breathe again. I hope they keep at it - its great.