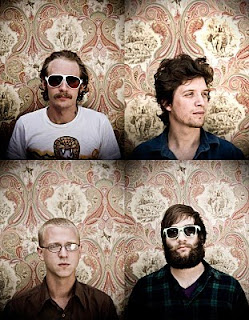 I heard about John McCauley last year when I went to see Dead Confederate at Hoxton Bar and Grill. I immediately fell in step with his down home southern US folk vision - his voice a plaintive strangler, denoting a man who has seen it all and still gets out of bed in the morning. The fact that McCauley is only 24 somehow heightens the magic. Since his first dalliances with Hank Williams tracks in his bedroom back in 2004, he has formed Deer Tick, a rollicking 4 piece that truly showcase the strength and passion in each of his songs, and projects them on a wide canvas of dense Americana that somehow translates - maybe because i was brought up on Hank Williams, Charlie Pride and Johnny Cash, it doesnt matter really! The point is that the band is good, and this track is indicative of what they do. Its from 3rd album The Black Dirt Sessions, coming out through their new label Partisan in June. It would be worth your while hunting down 2007's War Elephant and 2008's Born On Flag Day. They are currently touring with Dr Dog over in the US, so hopefully they will make another detour to ol Blighty before the year runs out.