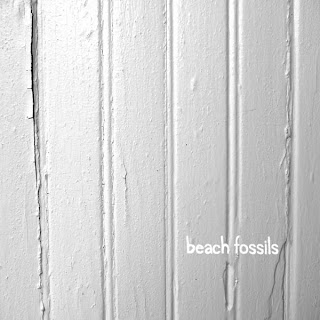 Its getting a little boring. The current trend of summery, shimmery, scuzzy, lo-fi pop meanderings have been dealt with in all ways, shapes and forms over the past 18 months. There are some great purveyors of this sound (my current favourite – ), but every person and his dog (or at least with Girls in their title) is doing it, and has really got to the point of saturation. Im drowning in this sound guys – give it a rest?

Don’t get me wrong – I find that some bands really nail the aesthetics of this ‘new’ style and create something beautiful. I just don’t see the longevity. Its becoming a pastiche – nay, a cliché – of hipster fey charm and dark sunglasses, summer angst and/or ennui, drifting meanderings…yawn.

But still, there are artists that plumb the depths of this already depleted genre to create something of value. One such artist is Dustin Payseur AKA Beach Fossils, a bedroom wanderer who, through eminent label Captured Tracks (who I have the utmost admiration for, and although they have helped to flood the market with likeminded acts, they ARE supporting music in a completely positive and exciting way, which I really love), has dropped a self-titled debut of sun-kissed assurance. And although these tales of slacker existence may not offer anything new, the cock and bull that pervades a lot of the current trend is amiss here, and Beach Fossils is all the better for it.

Some of these tracks have been floating around for some time before this release (Youth, Sometimes), with its soft sound complemented by an incredibly catchy guitar hook and Payseur’s barely awake vocals awash with reverb. Nothing new there, you might think. The trick is the virtuosity of Payseur’s songwriting and guitarwork – simple structures that set up the sunniest of riffs, evident in almost every track, held aloft like a trophy – as he should, as just one of these tunes would make a lesser band’s centrepiece in an otherwise lacklustre recording session. And Payseur himself, whilst sounding like he’s fallen into a vat of syrup but can’t be arsed finding his way back out again, nevertheless infuses every track with a certain sunny, even likeable effervescence that any angle that may have smacked of hipster chic beforehand has been buffed to a much calmer, smoother reality.

So all in all there isn’t anything overly original on Beach Fossils. What we do have is a Brooklynite who actually knows what he’s doing – he’s the kid who’s building his own rocket whilst the rest of the neighbourhood lark about smashing mailboxes and riding on their daddies’ fat wallets. He may affect that he has nothing to do, but if this is what results from malaise, we need to make it an institution.