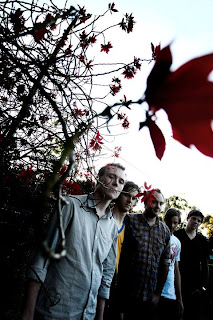 Brisbane five piece Nova Scotia have been doing the local thing now for near on five years, having collated two great, limited release EPs (Bear Smashes Photocopier and Maritime Disasters) and some stellar support slots, the most recent being Built To Spill. Their brand of off-kilter melodic guitar pop evokes such slacker icons as Pavement (hence the support slots for both Stephen Malkmus and Spiral Stairs) and Guided By Voices. So its exciting news to hear that they are about to unearth their debut LP (about time...) Nova Scotia in February through Lofly Records. And to mark the occasion they have given us their closing track, 'The World Is Not Enough', as well as the news that they will launch the album with a secret show on February 26th! If you want to get to this - which, lets face it, you all do - head over to Lofly for the deets. I dont know about you, but Im hoping this proves to be the first great guitar indie pop album of 2011. Only a month to find out...