Dufficy Drones On, Bleeds Out The Coffin 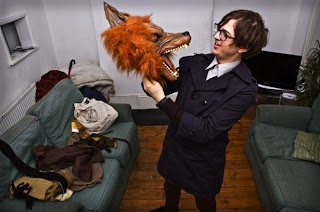 This is a funny one, as there are reference point for both Londoners and Brisbanites. As the man behind the sonic waterfall that is Winter Drones, Leon Dufficy has kept, and continues to keep, himself quite busy musically. Currently he is the guitarist of London dream popsters Still Corners, who are about to tour Sweden in anticipation for their debut SXSW shows in March. He has played with Keith Wood, otherwise known as Hush Arbors. He is a Brisbane ex-pat, first sharpening his sound with sonic miscreants Shuriken - one of the Sunshine State's most promising acts in the mid 00s (when not on mind altering substances...).

But Dufficy has forced another bow to his string. He brought out album Blood In The Coffin last year on small London label Sexbeat Records under the moniker Winter Drones. This title is apt, as the album does what it says on the tin - seven tracks of undulating drones that shimmer and shake in equal measures. The centrepiece is 'Stiff Wizard', a perfect showcase of Dufficy as a writer. As many artists have now flooded the market with their takes on ambient soundscapes, Winter Drones benefits enormously from the live aesthetic and manual manipulation of actual instruments. 'Stiff Wizard' starts with your basic fuzzed-out guitars that incrementally build up momentum. A simple electronic melody comes into play, and by the time the live percussion makes itself felt a new sonic realm has been entered. Fantastic stuff.

Blood In The Coffin may have only had a limited cassette release, but it is going to get the wider recognition it deserves as it has since been picked up by Pete Swanson (of Yellow Swans fame), remastered and put out through his Weird Forest stable. Only 250 pieces of wax have been made, mind. Still, that is a start - get it here.