Take These Tiny Migrants For Your Health - And Get Belatedly Covered Up! 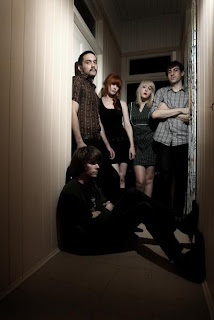 I went to my first stand alone gig on Friday night since arriving back in Brisbane - and already Ive been heavily impressed by a local act. Tiny Migrants opened up for Mark Sultan, and are a five piece that specialise in murky, scuzzy garage pop a la The Intelligence - they even did a great rendition of Christmas Island's 'Pre-Apocalyptic', which was pretty ace. The boy/girl vocal chants were good, as was the twin guitar attack - but I was most impressed by the driving bass that really propelled the band down the oil-slick runway to destruction. Their CD-R For Your Health is almost a carbon copy of their setlist, so its a nice lil keepsake, and an indicator that these guys are on the up and up.

I thought Id throw down two songs today - seeing as we havent had a Friday Cover Up for a few weeks, here's Tiny Migrants' Christmas Island cover, plus another track, 'Honeycomber'! Oowoohoo!