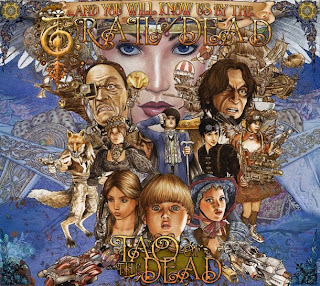 Texas' brutal rock lyricists ...And You Will Know Us By The Trail Of Dead are just about to hit us with their seventh LP, titled Tao Of The Dead. As you may have worked out by now, i am an avid fan of these guys ever since I bought their 2002 opus Source Tags And Codes, then seeing them demolish that year's Livid festival in Australia. The band is burdened with a love/hate relationship with the rock intelligentsia, due to their juxtaposition of crushing, aggressive slabs of angular rock and elegiac, blown out stretches of fanciful whimsy, and the newie - their second on their own Richter Scale Records label - doesnt veer too much from their modus operandi.

Beginning with their staple introductory instrumental, there are shadows of the outro of Source Tags And Codes here amidst the pomposity and grandeur, which had me tingling in excitement. I know that there is a lot of hate for these guys, Ive heard all the "pretentious twats" arguments to fulfil a lifetime, and I can understand some of the points raised - but I dont give a fucking shit. I love what these guys do, whether they stick to what they know best, or attempt to (fleetingly) reign it in. 'Pure Radio Cosplay' has a very 'Jumping Jack Flash' vibe that bleeds into what is an essential ToD track, which bleeds into another 9 tracks which makes an essential ToD album...until the final track. You see, that is just Part 1 - called 'Tao Of The Dead'. The final track, on the flipside, is titled 'Strange News From Another Planet', and is sixteen and a half minutes, split into five movements, of the band at their most esoteric, soaring, and - go on, say it - pretentious - but is also fucking amazing; close to the best thing they have ever done.

And I couldnt love them any more - they continue to run headlong at the Sun, and beyond, regardless of what those around them may say or do. They have their own self-defined destiny, and the artistry and dedication shown here showcases how strenuously they will strive to get there. The themes inherent in the album - environmental art, the death of radio, the narratological arc of 'the hero's journey' (very close to my heart as that is in part what my Masters thesis is on) - are heightened further by co-founder Conrad Keely's ever-present artwork, now entered into as graphic novel - a truly ambitious endeavour. Both Keely and Jason Reece contend that this is not a concept album, but rather a sequence of albums with an overreaching narrative thread. And this is some amazing news - as Tao Of The Dead sees ...And You Will Know Us By The Trail Of Dead at their most consistently excellent since Worlds Apart or possibly even Source Tags and Codes itself (although Im still fond of last album So Divided, so there you go. The Century Of Self - well, lets not go there). This is a true album - and an essential purchase.

Tao Of The Dead comes out February 7. The band are touring Europe March through to May, with an expected return to Camden's Electric Ballroom, exactly 2 years after they destroyed there. Genius.

Email ThisBlogThis!Share to TwitterShare to FacebookShare to Pinterest
Labels: And You Will Know Us From The Trail Of Dead, Livid festival, Richter Scale Records