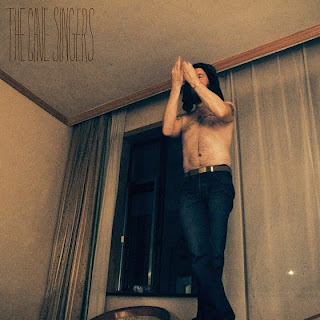 Seattle’s The Cave Singers are preparing to release No Witch, their 3rd full-length album and first with the ace Jagjaguwar label (home of Black Mountain and Women amongst others). What seems like a strange jumping of ship – their first two albums on Matador did well, and sound great – comes more into focus when the producer duties were filled by dark maestro Randall Dunn (the aforementioned Black Mountain, Sunn O))), Boris). The result is a lushness and depth that was missing from these blues folk fringe dwellers, as well as coaxing out the psychedelic roar that has shadowed their live performances.

It all opens innocuously enough – “Gifts And The Raft” and the great “Swim Club” evoke the vulnerability that alt-folk Americana inherently holds dear. The gear shift though comes in the form of “Black Leaf”, with its fevered guitar, tambourine, and singer Pete Quirk’s rambling rasp becoming a manic growl. It has a devilish swagger that has only ever been hinted at, and it clearly revitalises the band.

With the precedent set, No Witch runs into the hinterland in impressive fashion – the Eastern-tinged psych of “Outer Realms”, the whisky-fuelled CCR inflections on “Haystacks” and the amazing woozy space-out of “Faze Wave”. Closer “No Prosecution If We Bail” ties this menagerie up nicely with a short down-home visceral blues blast. Even when the three-piece return to their bread and butter, such as in the languid “All Land Crabs And Divinity Ghosts”, there is a renewed vigour present that electrifies.

Dunn’s fingerprints are all over this, no question – but you cant help that by releasing the beast, The Cave Singers have released there is another musical plane to be reached, and No Witch is a clear indicator that they are well on their way.

No Witch is out February 18.