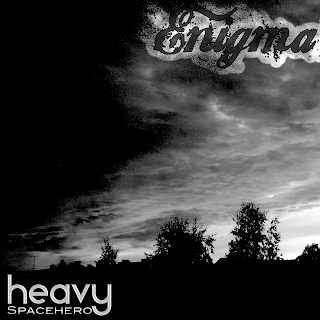 I received this little gem in the inbox last week, and whilst it isnt breaking any new ground on the post-rock corner, it is here on its lonesome as opposed to in tomorrow's Hits From The Box for two reasons...but first, a little about Heavy Spacehero.

Heavy Spacehero is Olli, who is based in Oulu, Finland. He started the project last year, publishing songs one by one, until finally deciding to put out an EP. Enigma is that EP. Which is all well and good - and it is pretty solid, three tracks of mood and atmosphere. The two things that got my interest though are the instrumentation and the samples that make up the 'lyrics' of the tracks. The music is (apart from the drums) all done on bass guitars, which was a pretty sweet touch (especially on the squalling noise that outros 'This Is Where New Lives Are Born'), whilst the samples are from some of my favourite movies - Brad Pitt from Seven waxes lyrical on madness in 'Behind These Eyes', whilst on 'Just Another Dimension' Christopher Lloyd gets all crazy eyed as Doc Brown from Back To The Future.

You can grab Enigma on the official website here.