What's In The Box, Akron/Family? 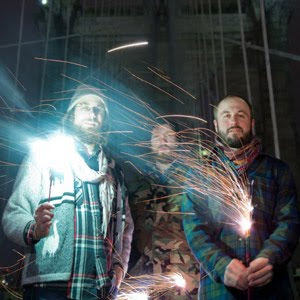 Portland, Oregon’s favourite psychedelic freak-folk noiseniks Akron/Family have carved out a very unconventional musical path since their self-titled debut. My first introduction to them was the track 'Running, Returning', which was on a Spunk Records EP sampler. Then when I went to purchase Akron/Family, I was perplexed by the plaintive ambiance that was spat back out at me. It wouldnt be until I heard 'The Rider (Dolphin Song)' from 2006's Meek Warrior, before I would quickly revisit the band and henceforth become a fan.

Nevertheless, there is a lot of frustration with Akron/Family, not half because they can be incredibly unconventional and obtuse. Still, their creative output is impressive, and some 6 years later, with segues into folk strumming, experimental glitches and sprawling bursts of guitar abandon, they have provided the world with their second self-titled release, with the ambiguous subheading The Cosmic Birth and Journey of Shinju TNT. Their record label, Dead Oceans, put out in their press release a bizarre notice that the first copies of this album arrived at their offices in a brown cardboard box with SHINJU TNT and AK DETROIT scrawled on it. From a short note and a video that arrived days later, it becomes "apparent" that the album was written in a cabin built on the side of Mt Meakan, an active volcano in Akan National Park on the island of Hokkaido, Japan. It was then recorded in an abandoned train station in Detroit, after a year out studying Bent Acid Punk Diamond fuzz and Underground Japanese noise cassettes, then chopped up their results into thousands of minute imperceptible samples interlaid with fuzzed-out rerecordings...

Whether you believe the elongated, secretive and surreal genesis of this album or not (also including leaking the album themselves in a looped, sampled and slowed down fashion so as to seriously confuse file-sharers worldwide), the end result is something that has managed to bridge all of the more out-there components of the Akron/Family aesthetic whilst making their best effort yet to bridge the mainstream with the obscure - and its this eclecticism that makes S/T II very nearly a resounding success.

Starting with ‘Silly Bears’, we are thrown into a joyous musical rocket ship that hurtles towards an ever-expanding sun – it is jubilant, infectious, and teetering on wanton self-destruction with its distorted effects, guitars and strange vocal harmonies (alongside lyrics about fun-loving bears). This is the best introduction to Akron/Family in general and S/T II in particular – there is verve, quirks, space and a pervading sense of silliness throughout. We have emotive atmospherics (‘Island’), Devendra Banhart via The Black Keys (‘So It Goes’), shoegaze via Vampire Weekend (‘Another Sky’), bizarre vowel harmonizing (‘A AAA O A WAY’) – and that’s only the first half of the record! You name it, its here – garage hoedowns, 60s elegiac pop, dream pop, blues rock… However, there are no pretensions here – Akron/Family are just ambitious and fit to bursting with musical ideas that they attempt to shoehorn into any given musical mould. It shouldn’t work, yet this menagerie does work in myriad ways. A flawed, yet fundamentally fun, release. 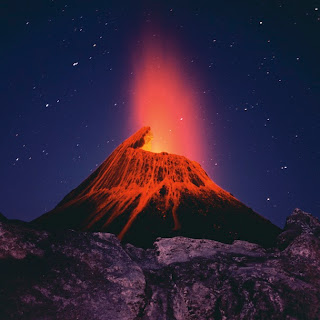 Akron/Family II: The Cosmic Birth And Journey Of Shinju TNT is out now.