Can You Tell Me How To Get, How To Get To Degeneration Street? 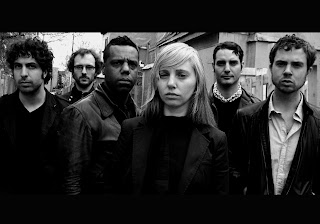 I have to tell you, I was relieved to like what I heard on Degeneration Street.

Canada's The Dears holds a place in my heart for a few reasons. Firstly, I bought No Cities Left randomly off eBay (I think it was going for $5?) even though then I didnt like 'Lost In The Plot', the only track I had ever heard of theirs - and it turned out to be one of my top ten albums of the 2000s. Then I head their track 'There Is No Such Thing As Love' - one of my favourite epic drawn out wigouts of the 2000s. Then, one a week journey into Brisbane to research for my Masters degree in 2007 (which I am yet to finish...), I saw The Dears perform at a place that was then called The Columbian - Im pretty sure it was a short-lived music venue, and nothing of redeemable value stands in its stead today. It was pretty much a boozy pool hall - a small one at that. And The Dears played there - sweat dripping from them as they poured their hearts and souls into their set - and it goes down as one of my top ten live performances ever.

Since then though, the love in the world of The Dears has faltered. Almost the entire band walked out after the recording of last album Missiles. Said album was, in my opinion at least, a very weak rehashing of Gang Of Losers. The Dears was the first concert I saw in London on my own, over at Porchester Hall, a beautiful venue, and whilst it was pretty good, the new band backing the band's mainstay Murray Lightburn were a bit green, there wasnt that really click you expect when watching a happy band.

I actually thought that was it. 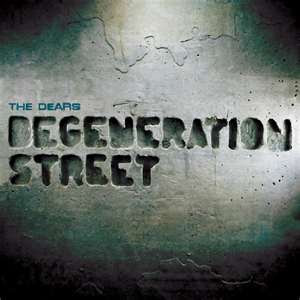 But then Degeneration Street is here, and its...kinda good. The funny thing is, the band that mutinied all the way back in 2008 have pretty much returned to the fold. And Lightburn claims they never really left. The band has a long history of "revolving doors". Whatever - the music sounds revitalised. Its oft-times vivacious and bubbling like Gang Of Losers; at others its reminiscent of the theatrical gloss that buoyed No Cities Left. Opener 'Omega Dog' has that brooding charm that we know and love; 'Galactic Tides' the best indicator that there is still some No Cities Left in the tank. 'Yesteryear' goes down a Motown route, and '1854' provides some fist pumping bravado and pomp. But as always, it is Lightburn's brilliant voice that is the focal point. It is not a brilliant album - some say its terrible - but dont be swayed by the jerks. This is a reminder of why The Dears holds that little place in my heart.

The Dears are touring the US leading into SXSW in March, then wing over to Europe, settling down at The Borderline on for a double billing on April 18 and 19. Worth checking out.

Email ThisBlogThis!Share to TwitterShare to FacebookShare to Pinterest
Labels: The Borderline, The Dears