Grandpa Was A Lion... 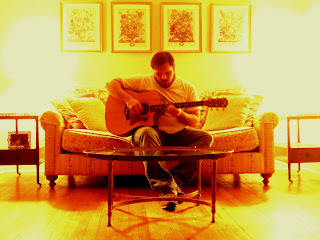 I have just been speaking to a young guy by the name of Justin D'Onofrio, who had sent me some music under the nom de plume Grandpa Was A Lion. An amazing set of tracks that evokes the lyricism of Elliott Smith and the candid heartache of Conor Oberst, D'Onofrio wrote and recorded the album on Garageband on a second hand iBook in his basement, then had them mastered. The entore album can be heard on his myspace, although it is currently unavailable for purchase - these are undeniably great tracks, especially the opening couplet ('Hello From The Farm', 'Mobile Alabama Blues') and the brilliant 'The Light'. He had originally had these songs done with a producer in New York (not naming names - smart), but the result was too slick, too unreal - it took away the immediacy of the songs. So the results can be seen as a rebuttal to the producer's take on what Grandpa Was A Lion was - which is a great thing to be able to say. D'Onofrio said that the guy was a nice guy, and he learnt a lot from the experience, but in the end it told him how he wanted to sound. I think we can all say that is a very good thing - snap this guy up, someone!