Capturing Night Terrors and Black Mountains In The Zoo 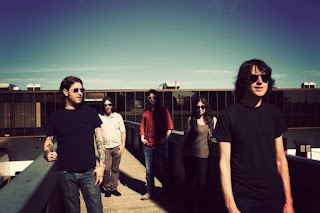 The good times continue at The Zoo tonight as Canadian psych warriors Black Mountain roll round with their delectable 70s dirges, lightened up by forays into folk and late 60s pop as seen to wonderful effect on last year's Wilderness Heart. Now I may be a bit of a purist here, but I was more than a little disappointed with the new album - mainly because Im a hardcore fan of their first two albums, and felt that the band's myriad other projects - such as Pink Mountaintops and Lightning Dust - were the perfect vehicles to travail down other musical avenues, thus leaving BM to do what it does best. However Im sure Ill be proven wrong tonight - that when songs like 'The Hair Song' are thrown in with the older material it will work wonders...

Almost as exciting is support act, Melbourne's The Night Terrors. This is the first of two stellar supports slots they have won so early in the year - next month they open for the almighty Hawkwind! Then to continue down the weird psych rabbit hole, they will travel to Berlin to be part of Polyhymnia Festival - headlined by Goblin! Jesus tittyfucking Christ.

Anyway, back to tonight's gig - it is going to be fantastic, a real visceral dirge of a blow out. Tix still available, so get on it.