Braden J McKenna (WYLD WYZRDZ) has just started up his own label called Inner Islands. Basically its a place for him and other like-minded chaps to produce musical pieces that hark back to nature and the inner journey. No sonic stone is left unturned. 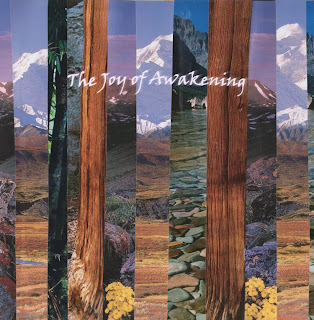 The first of two latest releases is The Joy of Awakening, a contemplative suite of tracks that marries rainforest field recordings with finger picking guitar and shimmering dreams by Sean Conrad, going under the moniker Gkfoes Vjgoaf (and no, I have no idea how to pronounce it). Its a fairly dense piece, and feels more like a meditative experience rather than an actual album to listen to. As Conrad states, The Joy Of Awakening has come to be "about a journey that the listener goes on. Imagine your celestial body traveling and being taken by an unseeable tribe of spirits that are trying to help you see the true nature of things. They sing and play for you and lead you from day to night through the forest, the ocean, and up into the mountains to reach your final resting place in the temple". 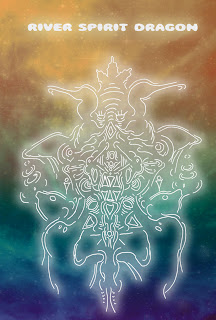 River Spirit Dragon (comprised of Stag Hare, who alongside White Rainbow put out a great split LP last year; Gkfoes Vjgoaf; and WYLD WYZRDZ) on the other hand is a forty minute, two track, meandering opus, built up out of an initial droning foundation and allowed to float on the slipstreams of time and space. It is not as exciting as The Joy Of Awakening, but there is a definite sense of kindred spirit in what Inner Islands is attempting to achieve here. Later in the year the label will release LPs from all three of these spatial mavericks, adhering to that continual spiritual sojourn into the sonic Other...