Sun City Girls Chew Over The Past 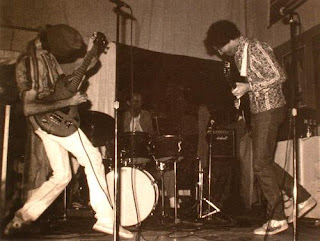 Those ethno-improv ethereal trippsters Sun City Girls wove a dense and intricate musical tapestry over the 26 years they were together, but out over 50 albums and myriad other types of releases before drummer Charles Gocher lost his battle with cancer in 2007. The Bishop brothers have banded together to release Gum Arabic, eleven tracks reaching as far back as 1983 to look at some of the more esoteric covers the band put to tape, and reinterpreting them. From the Morricone rumble of 'Sev Acher' to the Indian dirge of 'Helwa Shak' and the drunken psych blues ramblings of 'Night In Malta', their skewed jazz improvisational stylings permeated every noodle, strum, treble and beat. Hell - listen to 1988 track 'Esoterica of Abyssynia' and tell me that isnt a direct influence on Deerhoof! Whilst the Bishops have spread their wings to other ventures - notable Sir Richard's part in sludge instrumental supergroup Rangda -the legacy of Sun City Girls will always live on.