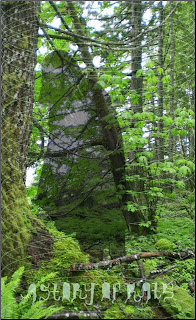 I havent heard much from Flingco Sound System in the past six months, after being introduced to the great San Fran band Dead Meat, although I mentioned a few other delectable acts on their roster (read and listen here). One dude that got a bit of notice from us was A Story Of Rats, who comes from the 'northwest plateau of the United States'. Otherwise known as Garek Druss, A Story Of Rats' M.O. is crawling atmospherics, investigating polyphonic tones, repetition, and distorted field recordings. He has a few releases out, most notably the Sea Of Sand split LP he did with Pussygut (they have since renamed themselves Wolvserpent) out on Olde English Spelling Bee.

Relinquishment is a cassette tape manufactured by FSS in a limited edition of 100 copies. The two tracks on Relinquishment are extended, cavernous and gritty. "Composition ii" is heavy organ drone while the slurried tones of "Composition iii" features a contribution on guitar from Matthew Merris. Its a dark, disturbing ride into the belly of the vermin gods.

You can pre-order a copy of Relinquishment here.

And as a little aside - Dead Meat are playing a few US shows with Cheap Time and Idle Times in March. Well worth checking out!
Posted by Brendan T