There's A Homo In My Head 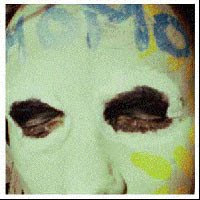 Melbourne's UV Race brought out Homo last year in cassette form, as has been the craze for some time. The problem with that is only a few people got to hear how fucking awesome this band is, and unless you got to to see em live last year chances are you havent heard much of them. Their self-titled release on Aarght! Records and other bits and bobs aside, there is nothing to really get your grubby mitts on...until March 29th, when In The Red will be releasing Homo on vinyl. You can hear the influences of likeminded Aussie reprobates Eddy Current Suppression Ring in tracks like 'Girl In My Head' or 'Down Your Street' (ECSR guitarist Mikey Young is behind them in the recording and mixing process), whilst their sloppy proto-punk gives way to slow faux-folkster 'Always Late' and explodes into psychedelic malaise in the titular track. With the rise of scuzzy, dirty, weird rock in Australia at the moment (Blank Realm, Circle Pit, Naked On The Vague, Slug Guts), its an exciting vanguard to be a part of - but to be honest, UV Race dont give a shit where they are.