Skull Defekts Get A Fresh Set Of Lungs 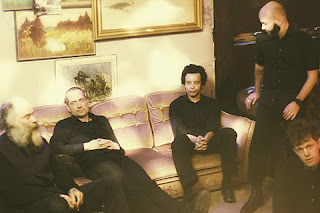 Sweden's The Skull Defekts might finally get the recognition they deserve based on three points. The first is their new signing to perennially ace psych-oriented label Thrill Jockey (Boredoms, Pontiak, White Hills, Barn Owl, etc etc). The second is the addition of former Lungfish frontman Daniel Higgs, his plaintive vocals making a very affirmative imprint across all eight tracks on their latest LP, Peer Amid.

And the third point? That Peer Amid is goddamned amazing.

Which shouldnt be that much of a surprise to be honest, when looking at the pedigree of the band. Putting Higgs aside, The Skull Defekts have been involved in a myriad of Swedish experimental outfits that are all of high pedigree, including Kid Commando, Satan Power, Alvars Orkester, Oceans of Silver & Blood, 8 Days of Nothing and Cortex, plus collaborations with Pan Sonic.

But what might be a surprise is the pure addictiveness Peer Amid offers. The album offers an amalgam of the sounds they have developed over the past half-decade - dark-side-of-the-moon drones, noise-rock, and heavy not-quite-metal sludge - but with the further augmented electronics, cyclical percussive beats and Higgs' croon/incantations, this album beggars belief. At times Higgs moans and chants with a shadow of Layne Staley - random vocalist to envision, but there you go - and the technical mastery here never gets in the way of the effectiveness these songs have. They are still meandering beasts, wandering the sonic planes, shimmering, slinking, stalking - but oh so darkly beautiful. The title track is the most elliptical of giants, as what could be an explosive chugging rock tune implodes into a twitching noise fest, never letting you get your rocks off; 'Gospel Of The Skull' is a shamanistic totem dance as performed by a slowed down, early-era Earth; 'Fragrant Nimbus' is a churning Sonic Youth aping behemoth, before it shatters into a million shards of angular rhetoric and tightly coiled aggression. My favourite track though is 'In Majestic Drag', a tribal drumming masterclass coupled with cyclical sonic swirls, and stuttering guitars before a distorted dirge and Higgs' chants lift everything to another, darker level. Yet that drumming...fantastic. Higgs is barely present in this track to be honest, but his influence is still prevalent in the end result.

Peer Amid is an album that I held a mild interest in before I put it on - afterwards, nothing will ever be the same again. So far - favourite album of the year.

The Skull Defekts are touring the US March and April with likeminded droners Zomes. Whether you like your Lungfish, or experimental rock, or want to have your life's perceptions shifted, get to one of these shows. Europe and other parts of the world will have to wait - but hopefully not for long... 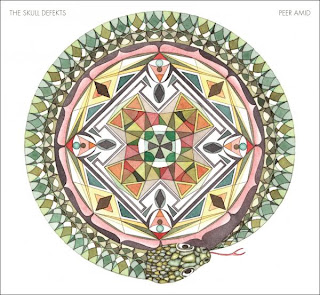 Peer Amid is out February 22nd.