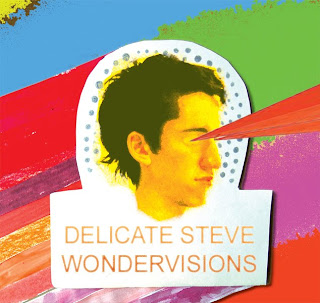 David Byrne's Luaka Bop record label usually delves into the weirder, somewhat world-music beat-infused side of guitar pop, having pushed along the fledgling careers of Geggy Tah and Cornershop, whilst currently housing Os Mutantes, Javelin and Tom Ze. Still, when I heard the first track off Delicate Steve's instrumental whizz-bang whimsy that is Wondervisions, I wasnt sure that Byrne had it right. "Welcome-Begin" has more incoming with Pavement than Cornershop's "Brimful Of Asha". But then the album spins some more, and the revelations become clearer. 'The Ballad Of Speck And Pebble' (which I featured here) is a rambunctious funbucket of a track, and the only track to share the slightest resemblance of a vocal track. From here in there is so much surreal trickery going on, with Steve (AKA Steve Marion, 23-year-old New Jersey multi-instrumentalist) flicking in sonic electronics, Afro-tribal drumming, ecstatic distorted riffs... Nothing is straightforward here, but yet it feels so utterly effortless - listen to the way in which the guitar veritably sings on standout track 'Don't Get Stuck (Proud Elephants)' whilst soaring synths and basic bass drum and percussive taps all meld in the background... Or the incessant beats on 'Butterfly' coalescing with the insanely sweet twanging guitar lines before the eruption of heavy distortion that rather than intimidate, heightens the lucidity of the colours emanating from without.

This is experimentation of pop and guitar conventions at its most infectious.How could Byrne NOT resist this? Its as if Fang Island and Dirty Projectors got together one night after taking some Quaaludes and threw as many musical outbursts as they could into the path of Brian Eno's touring bus, just as James Murphy enters an ice-cream shop nearby, and Byrne smiles maniacally from the shadows. For an instrumental record, Wondervisions is incredibly lyrical (and in a similar vein to Fang Island's self titled debut last year in terms of contagious instrumental melody). Its also a hell of a lot of fun - and deserved of a hell of a lot of recognition. Akron/Family are doing their bit, pinning him down to do their entire Stateside tour. Damned fine - and so infectious that I am getting Wondervisions of my own.