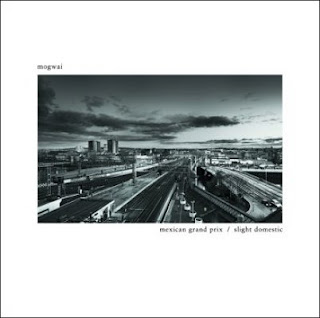 Mogwai's much anticipated LP Hardcore Will Never Die, But You Will (Rock Action/Sub Pop) comes out on Monday - Ive been dying to talk about it for months! - so that is something to look forward to. But in true SM style, we will give you yet another taster of what to expect. The Glaswegian noise-o's have released another single off the album (with great artwork again - see above...) - 'Mexican Grand Prix', with a new track 'Slight Domestic' as the B-Side. Its great Mogwai, with the b-side holding strongly to the added use of piano and strings (!) to drive the mood along - and whilst there isnt the same cathartic explosion of sound that marked their earlier efforts, the song is more reminiscent of fourth album Happy Songs For Happy People - one of my favourite albums ever - so its great! But, of course Im biased...

Mogwai embark on a worldwide tour on Sunday, starting in Belfast before doing the UK (London on the 25th Feb), Europe and North America. No news as yet on their return Down Under - but it will happen...