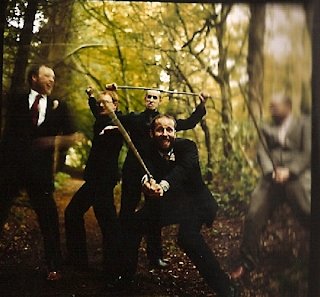 Happy Valentine's! I hate this 'holiday' - what a pile of commercial bullshit - but I may just make 2011 an exception. There are quite a few lovely releases coming out today that would make for fine releases - Ringo Deathstarr's Colour Trip, PJ Harvey's Let England Shake, Bright Eyes, The Twilight Sisters, La Sera... But personally, if you wanted to melt my heart and get into my pants, you'd be coming round to my house brandishing the new Mogwai LP, Hardcore Will Never Die, But You Will. The seventh studio album by the perennial instrumental rockers, it is one of the most anticipated releases of 2011.

So, how does it weigh up?

Let me tell you something first. Ive had this album for about a month now, as have a few of my friends, and I can tell you that this album has brought on a fairly lively amount of debate as to its quality. You cant get more divisive than the quotes 'transcendental' and 'utterly unimpressive'. But that has been the case here. Some of my friends feel that Hardcore... is a valid entry into the Mogwai canon and upholds their quality output and why they are still one of today's best bands, period. Other friends believe that Hardcore... is the proof in the pudding that Mogwai's latter releases have subscribed to the notion of diminishing returns, and that they should give up now. Others still maintain that Mogwai have never been relevant, are actually quite shit, and should go fuck off and die.

SO, back to my thoughts. I think I should refer to my sister's thoughts as well as my own here. Both of us being avid Mogwai fans - we traveled to Luxembourg to see them in 2008 - we almost died when getting out hands on the LP. But both of us after the first listen we unimpressed. It felt a bit Mogwai by numbers. Both of us went away endeavouring to give it another listen.

And that second became a third, then a fourth...

This is the first time that Mogwai havent hit me from the onset since Rock Action, but whereas that album had some serious filler amongst its monumental tracks, this is a grower in the truest sense, and possibly their best full album listen since Happy Songs For Happy People. This cohesion is in no small part due to the production of one Paul Savage, he who worked with the Scots on their debut LP Young Team. The difference in this album, and what makes it a possible bridge into another chapter of Mogwai's evolution, is the blissed out tracks and the more hushed slow builds that exist here. When they do explode - whether it be the sustained attack of 'Rano Pano' or the sudden fit of rage that hits the latter half of 'You're Lionel Richie' - its more measured, more controlled. In the lighter moments, such as the evocative 'Letters To The Metro', the crystalline tinklings of 'Death Rays' or the funereal dirge of 'Too Raging For Cheers', the structure of the songs and the sounds placed therein are precise - and thats Mogwai in a nutshell. There are no accidents here. They are consummate performers, and continue to stretch themselves within and beyond the confines of the genre they invariably find themselves in.

I think it rather naive for people to say that the Glaswegians have delineated off their designated path, or that they should have done a Godspeed or a Slint and dissolved much earlier. For the band continue to push the instrumental envelope, to explore the myriad inflections within the sounds of light and dark, and to do it all with a healthy slice of humour to boot. So there isnt the nihilistic atom bomb that 'Like Herod' is, or the menacing beauty of 'Hunted By A Freak', or the spiralling splendour of 'New Paths To Helicon I' - but I feel they have pushed through that, taking those experiences and have molded something entirely new. Right, its not exactly original per se, but it is undeniably Mogwai - they are who they are, and never have they tried to be anyone else. Hardcore Will Never Die, But You Will is on a par with The Hawk Is Howling in my opinion: an album that, whilst not changing the game, is at least upping the stakes. 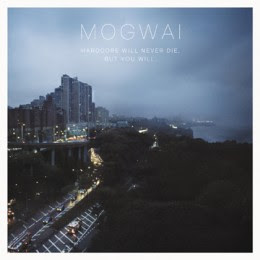 The album is out today on either the band's own Rock Action Records or Sub Pop. Its being streamed over at Rolling Stone too.