Harden Up For The Dolphins 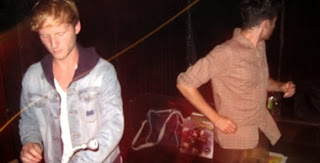 One of Paul's favourite albums of last year was San Fran via NYC outfit Mi Ami's Steal Your Face, a record of intense viscerating craziness. They also played an insane set at the now defunct Barden's Boudoir which was one of the highlights of the year. Well, a bit has changed since then - bassist Jacob Long has left the band, thus Mi Ami becoming primarily a two piece. That was how it was all run in the first place - Damon Palermo and Daniel Martin-McCormick pretty much ARE Mi Ami - so no great loss there. The second piece of news is that their next EP is coming out soon, and is to be called Dolphins. The first track of it, 'Hard Up', is a bit of a tangential jump for the band, with the electro vibe much less accelerated and fevered than usual, and seems to mark in interesting new chapter - but it still holds the intrinsic core that the band is known for. If you wanna check the other tracks on the EP, head here - Martin-McCormick's voice is still as manga-crazy as always...

Dolphins will be out March 15 on Thrill Jockey (they just keep churning out the good stuff, dont they?) Mi Ami will be blasting Europe away in April, with a date at Corsica Studio under the Upset The Rhythm banner, so keep your eyes peeled for those dates...

Mi Ami - Hard Up from Thrill Jockey Records on Vimeo.