Japanther Scuffing Their Rhythm Up Tonight! 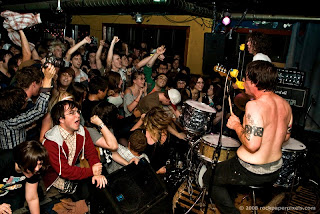 Its been a while since we talked up an Upset The Rhythm gig, but we have one for you now, headlined by an act that I came across accidentally. Near the end of 2009, my friend Dan had downloaded what he had thought was the album that I was talking to him about at a party some time previous. When he put it on, I was immediately perplexed at the scuzzy as fuck scattershot punk that was coming out of the speakers...and were they really singing about River Phoenix?

Turns out that the album Dan thought was Japandroids' Post Nothing was actually Japanther's Scuffed Up My Huffy - and a new favourite band was born. Japanther may have started out as an art project, but their profanity-fuelled sampled introductions, incredibly loud scuzzy guitars and nonchalant viewpoint on just about every aspect of society makes these crazy Brooklynites an absolute must-see. They are to be supported by Bitches (we have talked about them here) and Shellshag.

Japanther et al are playing The Dome tonight for 8 squid. Dont worry - there are plenty of tickets on the door. This will be a cacophonous clusterfuck of a gig, which means a lot of booze, a lot of noise, and a hell of a lot of fun.