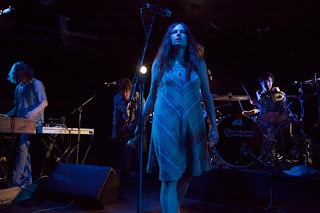 This week’s unusual run of stellar international gigs at the Zoo continues, with Black Mountain the drawcards tonight. To lead us in are The Night Terrors - an unusual beast, wielding keyboards, synthesisers, effects pedals, bass, drums and an elaborate Theremin that is the crucial “member” of the musical aesthetic. And it’s an interesting proposition to watch Miles Brown play it – with flourishes reminiscent of a renowned cellist – and to also hear how effective it can be. Like a Syren, the sounds emitted evoke otherworldly beauty and brutality, depending on the song, much like Barry Burns’ efforts for Mogwai. There are elements of “one trick pony” at times, but it’s when everything meshes together – such as on understated beauty Righteous or apocalyptic number Saturnalia - that the importance of such an unusual band in the Australian music scene can be truly appreciated.

Stephen McBean leads his Black Mountain cohorts onto the stage, looking shaggier and more stereotypically psychedelic than usual. The stage members take their now defined positions – McBean to the right, almost from view; co-leader Amanda Webber out front, armed only with her tambourine and her disarminginly soaring voice; Matt Camarind hunkers over his bass; Jeremey Schmidt, penned off by his instruments of interstellar destruction; and Josh Wells, dressed more like an Aussie punk band sticksman with his singlet and green and white football socks.

Without any cues, the band takes us on a journey into the heart of the hazy wilderness. New tracks like The Hair Song and Radiant Hearts get early air time, and how – their shifts into ebullient Americana and evocative politico-folk never puncture the atmospherics. Queens Will Play is a woozy serpentine groover, whilst Evil Ways is Black Mountain at their most devilish – incessant tribal drumming (Wells is possessed tonight), sultry guitar lines, sexy and beguiling keyboard bolts before the meat is flayed off the bone in style.

The centrepiece is the rolling gargantuan of a track that is old favourite Druganaut, with its extended running time devoted to creating a maelstrom of tightly wound stoner mania that gave me gravel rash to the jaw. It is to both the band’s and the venue’s credit that such a giant sound can be created, harnessed and contained consistently, although Webber’s normally beguiling vocals are occasionally lost in the mix. The set steamrolls through the crests and valleys of the dark side of the moon (as perfectly highlighted by sinuous beauty Roller Coaster), hardened by coiled precision and an innate ability to take us to the brink of cliché before throwing us into the abyss of the unknown – two factors remiss from most psychedelic rock bands.

When the dust settles after a particularly barnstorming encore (featuring Sabbath-aping Let Spirits Ride), Schmidt continues a droning synth line for some minutes before signing off. The stage darkens once more. Black Mountain had come in the night and stolen our souls. 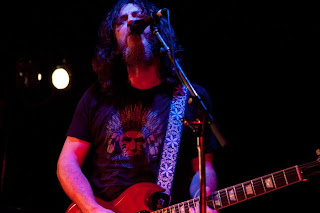