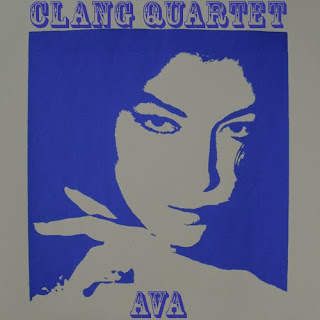 Independent drone label Silber Records are putting out a brace of free EPs, on of which is Caught On Ava, a one track propulsive dirge by performance/noise act Clang Quartet. Heading off into the desolate, dark, green-tinged sunset, 'Ava' is over thirty minutes of cacophony, chaos, improvisation, noise and silence. It was recorded from a live performance at the Ava Gardner Independent Film Festival back in September 2008. Its actually quite coherent despite how disparate the various homemade instrumentations may seem at times. Its a percussive near-masterstroke - although the adherence to faith is unclear, it doesnt deter from the aural journey. Im listening to it for the second time as I sit in the office gazing out at the green foliage outside, the rain steadily coming down - its striking a Merzbow-like chord. Interesting stuff.

Download 'Ava' below - it is 56MB though, but worthy, even for a one-off experience.

And while your at it check out Silber's webzine QRD - this month they talk to guitarists, including two of my faves Alan Sparhawk (Low/Retribution Gospel Choir) and Jeff Schneider (Arab On Radar) - pretty sweet.
Posted by Brendan T