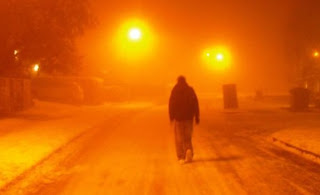 Whilst not enamoured with the name (despite being an English translation for an amazing Sigur Ros song), Good Weather For An Airstrike has wooed me with its sweeping cinematic take on post rock. Londoner Tom Honey has, in EP Signals, created a suite of achingly beautiful music that I can't help but think of a beautifully shot and heartbreaking indie Scandinavian film score. This is the kind of music that you put on, turn it up as loud as it goes, then close your eyes and let it wash over you. The sparse physicality of the strings in particular are what drives each song into another realm. Its reminiscent of the instrumental tracks on Sigur Ros' Heim in some areas (so the name is prevalent), and that is an amazing thing to achieve.

(NB - apparently GWFAA was born after Honey needed a way to overcome the effects of succumbing to a bout of tinnitus. A nice piece of trivia to go with this ethereal sound...)

Email ThisBlogThis!Share to TwitterShare to FacebookShare to Pinterest
Labels: Good Weather For An Airstrike, Sigur Ros