Hamming It Up Once Again 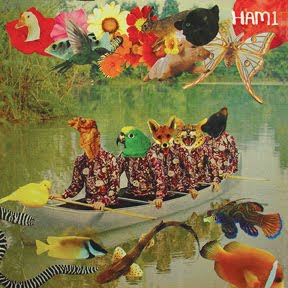 I know, Ive posted twice about HAM1, but the album is about to drop, and I finally have it in my sweaty mitts, so what the hey, hey?
Let's Go On And On And On And On With HAM1 is actually a befitting album title, as this LP, although clocking in at about 45 minutes, is one that deserves many repeated listens due to its diversity. For folk psych troubadours, there are no less than three instrumentals, as well as many parts that up the ante in the rock department. Jim Willingham continues his skewed search for the American Gothic of his Athens, Georgia homeland, his narratives remain exuberant and woozily literate, but this time around high production values and some amazing compositional play has heightened the propensity for HAM1 to strike a nerve, to caress the soul, to get you to sit back on that stool and drink another pint as these dusky ballads unravel. Highly rated indeed.
See below, one of the instrumental tracks and one of the more rumbling tracks - this may seem eclectic, when you think of the past two tracks we've posted, but its the magic of HAM1 that makes it all mesh together so seamlessly (and if you missed those posts, see them here and here). Good night all!
HAM1 - Cavern In A Square
HAM1 - Feathers
Posted by Brendan T

Email ThisBlogThis!Share to TwitterShare to FacebookShare to Pinterest
Labels: Ham1